Search
Menu
Search
Check out our roundup of Alyssa Milano's versatile hairstyles over the years including recent styles. See how the stunning star dramatically played with several hairdos and colors that are all visually pleasing.

Alyssa Milano has lots of fans all over the world. They love her for her works and her looks too. To many people, she is a fashion icon. They follow her makeup and hairstyles. She is one of the actresses who has changed her hairstyles many times. She is never afraid to experiment with her hair. Generally, though she has long and thick hair, she didn’t hesitate to cut it short. Alyssa’s medium layer hairstyles made her look elegant and sophisticated. Sometimes she wore it straight and sometimes a little wavy. Ponytails and updos on her medium length hair looked very smart. She has tried a number of short hairstyles recently which makes her look bold and beautiful. Last year she was seen on a number of occasions in short hairstyles with bangs in front. She looked confident and gorgeous. She is one of the rare people who can change their looks so drastically.

She has also experimented with her hair color. Her selection of hair color is so elegant that it seems to blend well with whatever hairstyle she puts on. She is a trendsetter and people appreciate her fashion sense. She is an icon for many women.

She’s a multi-talented personality who had a very colorful career. She is an Italian-American actress who has worked in various television shows and movies. She began her life in front of cameras from the age of seven. She appeared in different commercials from a very young age. She also did various off-Broadway productions.

Her parents were a part of the fashion and film industry, so she always got the support from her family in pursuing her career. In 1984 she made her film debut with the movie ‘Old Enough’ and the movie was a big success. From then on she never had to turn back. She started getting offers for TV shows and films. She has starred in the super hit television series ‘Charmed’ for 9 years. She was on ABC’s show ‘Who’s the Boss’ that ran for 8 years. Some of her other hit shows include ‘My Name is Earl’ and ‘Romantically Challenged’. Recently she was seen in the TV series ‘Mistresses’. She is also hosting the show ‘Project Runway All Stars’.

Among the Hollywood movies that she did some of the films worth mentioning are ‘Hugo Pool’, ‘Fear’, ‘New Year’s Eve’, ‘Hall Pass’, ‘Wisegal’. etc. She has received about 6 awards for her outstanding performances in films and TV shows. She has produced a number of independent films as well, establishing herself as a producer. She was also a singer at some point in her life.

Besides being an actress, a singer and a producer, Alissa is philanthropic. She is involved in a number of projects that help women and children. In 2003, she was selected as the National Ambassador to UNICEF. She often works as a fundraiser to collect money for different social activities. In 2004, she received the ‘Spirit of Hollywood Award’ from the John Wayne Cancer Institute. Her ‘Me Too’ campaign is now a hot topic of discussion. Through this campaign, she is trying to raise awareness about sexual harassment against women and she has received a very positive response from people all over the world.

You will be surprised to know that she also has her own fashion line. You will get jewelry, clothing, and other things in her store. She has recently written a book as well. With so much involvement in different tasks, she has proved herself to be someone who chases are dreams till she achieves it.

Alyssa Milano showcased a center-parted wavy hairstyle that’s accentuated with purple hues during the premiere of “Bombshell” at the Regency Village Theatre on December 11, 2019.

The actress wore a black one-shoulder dress paired with hoop earrings at the Lifetime TV Summer Luau last May 20, 2019. She finished the look with a sleek half updo along with pink lipstick.

Alyssa Milano arranged her thick tresses into a stylish top knot during the VH1’s TrailBlazer Honors on February 20, 2019. It was complemented with gorgeous earrings and a burgundy suit.

The actress had her center-parted waves in blonde during the 32nd American Cinematheque Award Presentation Honoring Bradley Cooper held on November 29, 2018. It perfectly matches her nude silk dress while contrasting her bold red lipstick.

Alyssa Milano looked gorgeous in a deep V-neck dress that she wore during the Variety’s Power Of Women: Los Angeles on October 12, 2018. She complimented it with a side-parted hairstyle that’s curled at the ends.

Alyssa Milano wore a messy upstyle hairstyle emphasizing her hoop earrings and turtleneck dress at the “A Star Is Born” Los Angeles Premiere on September 24, 2018.

The actress looking casual in a blue shirt along with a high ponytail that’s incorporated with a soft puff at the front. This was taken during the “Fahrenheit 11/9” Los Angeles Premiere at the Samuel Goldwyn Theater on September 19, 2018.

The actress arrived at the Showtime Emmy Eve Nominee Party on September 16, 2018, with soft, defined curls complemented with natural-looking makeup and a ruffle dress.

Alyssa Milano was spotted on August 6, 2018, in New York City wearing a floral print dress and black shades along with her tousled highlighted waves.

The stunning star made a perfect top knot bun that emphasized her dangling earrings at the Entertainment Weekly Pre Emmy Party on September 15, 2017. 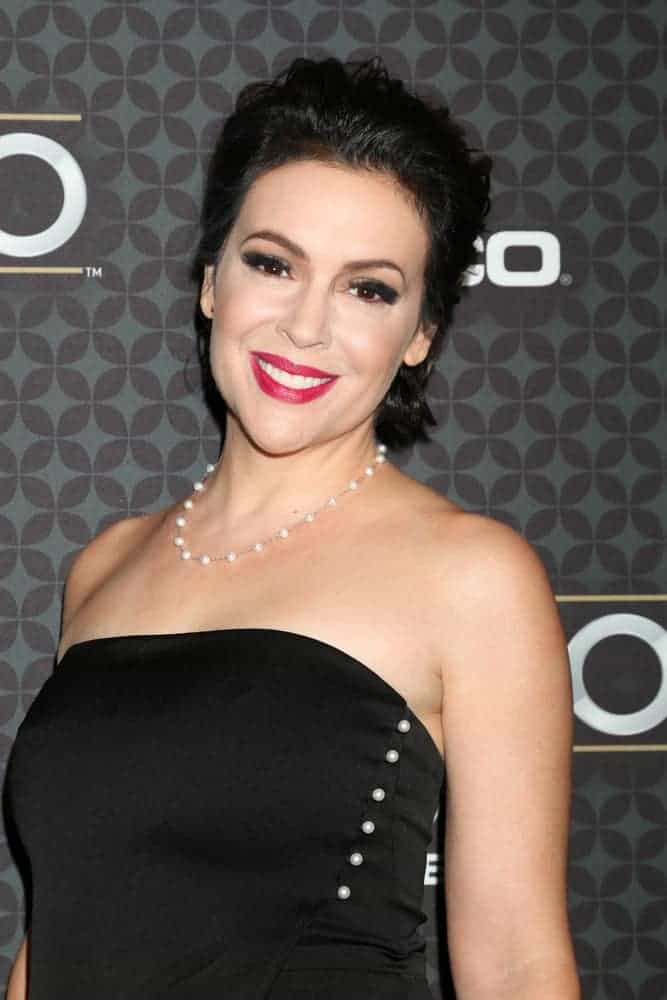 Alyssa Milano definitely wowed the crowd with her sophisticatedly styled loose upstyle locks at the NHL 100 Gala on January 27, 2017.

This short side-parted bob never gets outdated and looks nice to her as she attends the Weinstein Company and Netflix 2017 Golden Globes After Party on January 8, 2017.

The proud mom of two went super short in a pixie cut with a deep side part at the Kiehl’s LifeRide for Ovarian Cancer Research on September 22, 2016.

Actress Alyssa Milano attended the 26th annual Taste of the NFL Party with a Purpose at the University of Houston on February 4, 2016. She wore a braided upstyle incorporated with blue dangling earrings.

This celeb slicked back her brunette tresses into a high twisted knot for the “Get Hard” Los Angeles Premiere on March 25, 2015. 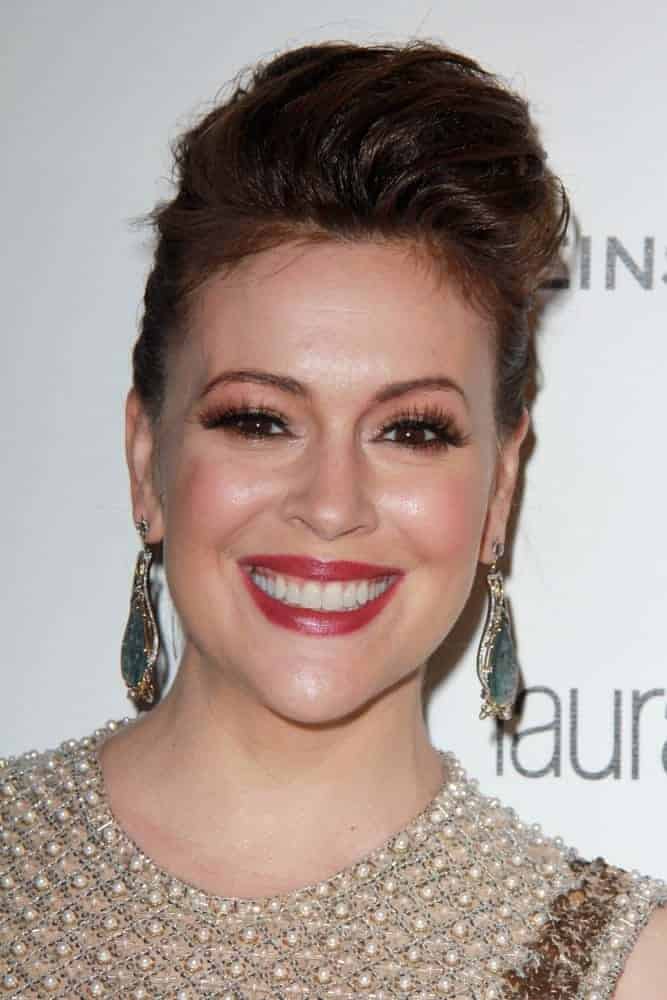 This classically styled pompadour updo looked perfect on her at the The Weinstein Company/Netflix Golden Globes After Party on January 11, 2015.

The gorgeous star wore her brunette-shade locks in tousled layers with curtain bangs for the “Into The Woods” premiere on December 8, 2014.

The American actress did a casual pompadour upstyle for her auburn locks as she promotes the “Touch” Apparel on February 1, 2014.

Replicate this messy but voluminous medium-length layers this pretty actress wore at the Hollywood Reporter’s Next Gen 20th Anniversary Gala on November 6, 2013.

This female celeb gives us long-hair envy in a sky-high pompadour half-up style at the 2013 Young Hollywood Awards on August 1, 2013. 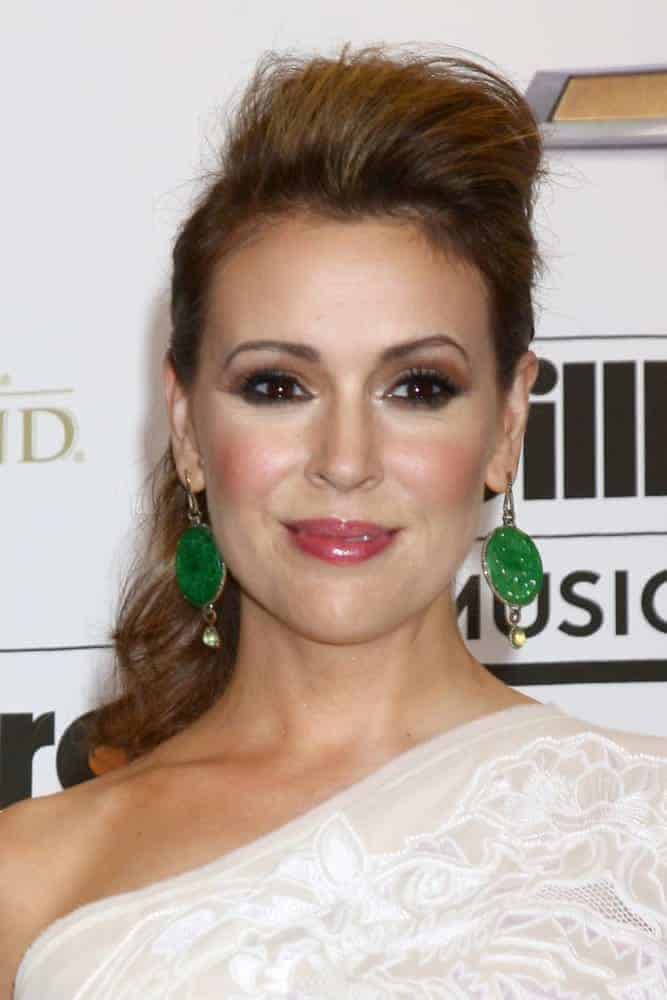 Alyssa Milano exhibited a pompadour low wavy ponytail that’s elegantly funky and just perfect for the Billboard Music Awards 2013 on May 19, 2013. It was incorporated with green statement earrings and a white floral dress. 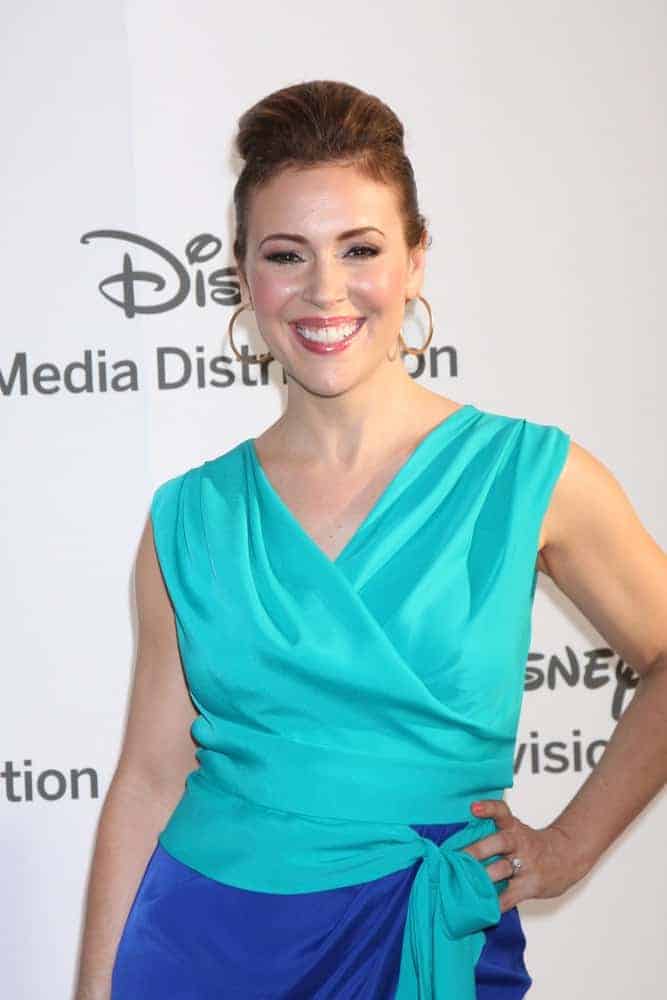 This celeb is wearing a classic pompadour bun at the ABC / Disney International Upfronts on May 20, 2012. She paired it with hoop earrings and a two-toned wrap around dress.

With her chopped medium-length locks styled into a bob, the actress looked chic at the Los Angeles premiere of “New Year’s Eve” December 5, 2011.

The American actress rocked the easy-breezy look with her big loose curls at the Los Angeles premiere of “Horrible Bosses” on June 30, 2011.

The mom-to-be is happily wearing her flipped out loose waves with a side part and highlights at the Los Angeles Premiere of “Hall Pass” on February 23, 2011.

The singer-actress has worn her gorgeous locks in a cute bob with a beaded headband for the 12th Annual WB-In Style Golden Globe After Party on January 16, 2011.

Alyssa Milano looked fresh in medium-length loose waves at the Drop in the Bucket “Cause on the Rocks” Fundraiser on October 19, 2010. She finished the look with a white lace dress and a light makeup.

Alyssa Milano modeled her chic slicked back pony at the VH1 2010 Do Something Awards on July 19, 2010. She completed the gorgeous look with a shining silver dress.

Alyssa Milano’s auburn mane was styled with side pinned half and some big loose curls to one side for Anti-Bullying Alliance Launch on April 29, 2010. She wore a matching necklace and earrings along with a black spaghetti dress.