Tags:Celebrities, Men
Prev Article Next Article
Take a look at David Beckham's versatile hairstyles over the years. See how the sports star and fashion icon played with various cuts and styles that he rocked confidently.

You will hardly find many sportsmen making it to the fashion magazines. David Beckham is an exception. He has an incredible sense of style and his fashion sense has always been something to talk about. He has experimented with lots of hairstyles. Some of the haircuts were much ahead of time.

No matter how ridiculous the hairstyle may be, he managed to put it up very well. Here we are going to look at some of David Beckham’s most inspirational hairstyles. The buzz cut that he made became very popular. He shaved off his hair and made them very small, yet the style looked very cool on him.

At one of the bodywear launch programs of the fashion brand H&M, Beckham was seen in an elongated hairstyle with short hair on the sides. The elongated hair on top was swept back. The golden color really suited him. He was seen in a short edgy style. His temple was shaved.

The most interesting part of this haircut was that it has a shaved triangle on one side near the forehead. Shaved temple really looks good on Beckham as it flatters his face. Some elongated hair on top with some modest color makes a good style for him. One of his most interesting haircuts was mohawk In this hairstyle, only the middle part of the head has a strip of hair and the rest are shaved.

At the time when shaved hair design was trendy, Beckham put on a very short hairstyle with two parallel shaved strips on one side. He has tried bleached hair as well. Short to medium length haircut also looks great on Beckham. He has tried both straight and wavy styles on this length of hair. In 2003, he was seen in cornrow hairstyle. It is very unlikely for a white man to style like that but Beckham carried it really well. Pompadour hairstyle is very popular and it suits Beckham perfectly.

Out of the few names that come to your mind when you think of football, David Beckham is one of them. He is one of the greatest football players of all time. He played for England and also for the Manchester United and others. He won league titles for four countries. During his long career, he won 19 big trophies. His name is on the f FIFA 100 list of greatest players of all time. His name is also in the English Football Hall of Fame.

He became the second-best player in FIFA 2004. His bending free kicks, passing and crossing abilities are unique and outstanding, making him apart from the rest of the players. He was the captain of the English National Team for six years. He earned 58 caps. He was one of the highest-earning football players in the world. He works as the ambassador of UNICEF UK. With his outstanding playing skills, all football lovers will agree that no one can bend the football like Beckham.

Here are David Beckham’s hairstyles over the years.

UNICEF Goodwill Ambassador David Beckham spoke at a high-level meeting on the 13th anniversary of the adoption of Convention on Rights of the Child on November 20, 2019. He had a crew cut that smoothly transitioned to his grown beard.

David Beckham paired his long blonde hair with a green beanie as he enjoys the final game between Grigor Dimitrov & David Goffin at Nitto ATP Finals World Tour on November 19, 2017.

David Beckham was oozing with manly charms when he donned the man bun at the amfAR Gala Cannes 2017 at Hotel du Cap-Eden-Roc on May 25, 2017, in Cap d’Antibes, France. 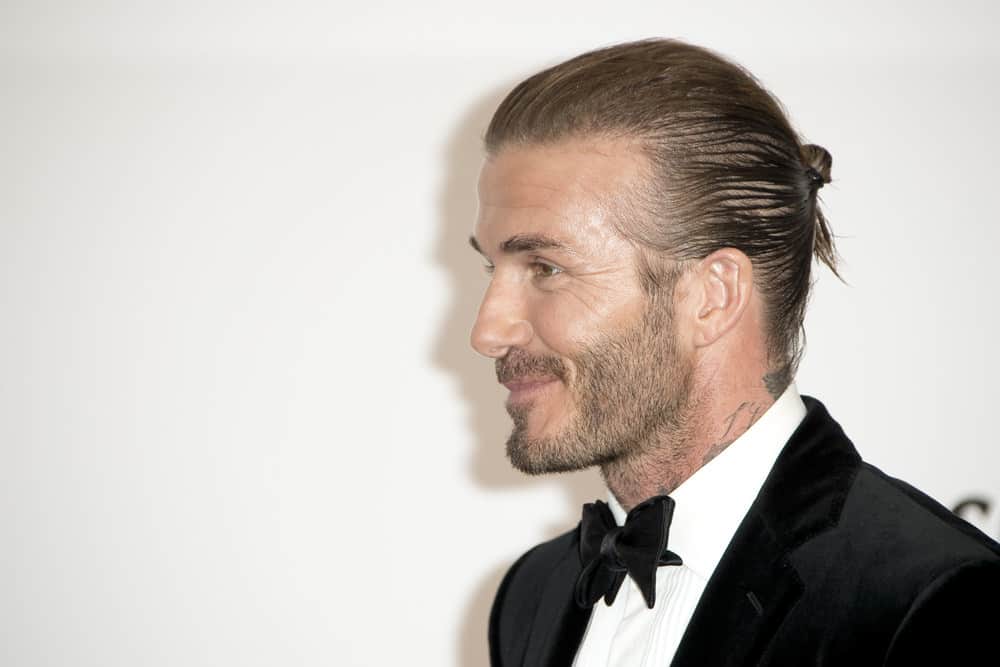 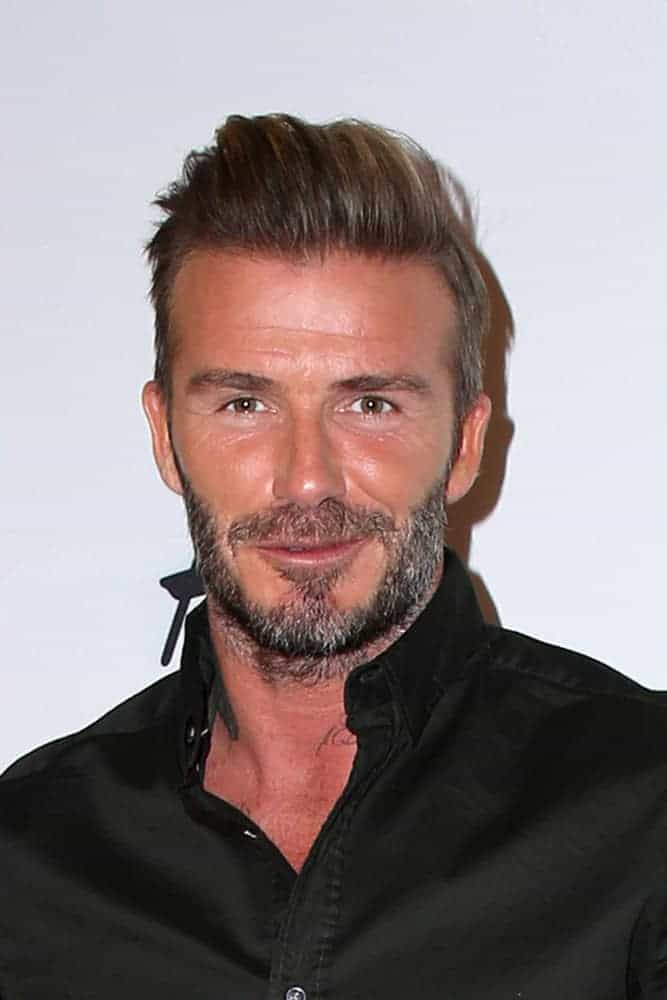 David Beckham looked neat and classy with a pompadour hairstyle that’s slicked back at the H&M Modern Essentials Campaign Launch at the H&M Store on September 26, 2016 in Los Angeles, CA.

David Beckham shows the side profile of his tapered haircut at the first annual Nickelodeon Kids Choice Sports Awards at Pauley Pavilion, UCLA in 2014.

David Beckham looked stylish with a pompadour hairstyle featuring extra short sides with elongated back-swept top during the launch of his Bodywear range at the H&M Super Bowl Event on February 1, 2014 in New York City.

David Beckham was perfectly coiffed with a slicked-back hairstyle when he arrived at the Time Warner Sports Launch of TWC Sportsnet at TWC Sports Studios on October 30, 2012, in El Segundo, CA. 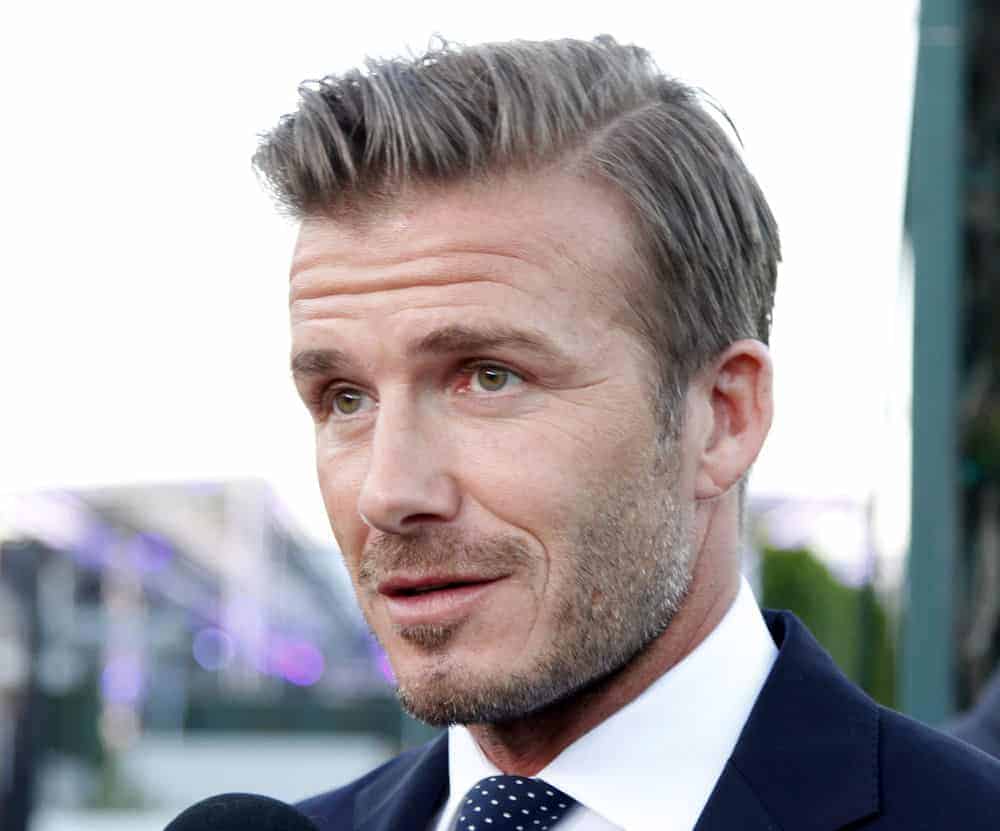 David Beckham went for the side-swept hairstyle at the Time Warner Sports Launch of TWC Sportsnet and TWC Deportes Networks at TWC Sports Studios on October 1, 2012, in El Segundo, California.

David Beckham warming up before the MLS game between the Los Angeles Galaxy and the Portland Timbers on April 14, 2012. He cut his hair with a neat undercut and styled it with a front brushed up.

David Beckham pulled off wearing a headband during the CONCACAF match between the LA Galaxy and Toronto FC on March 14, 2012, at the Home Depot Center in Carson, Ca.

David Beckham sported a tousled hairstyle with an elongated top before the Chivas USA vs Los Angeles Galaxy game on Oct. 3, 2010, at the Home Depot Center in Carson, Ca. 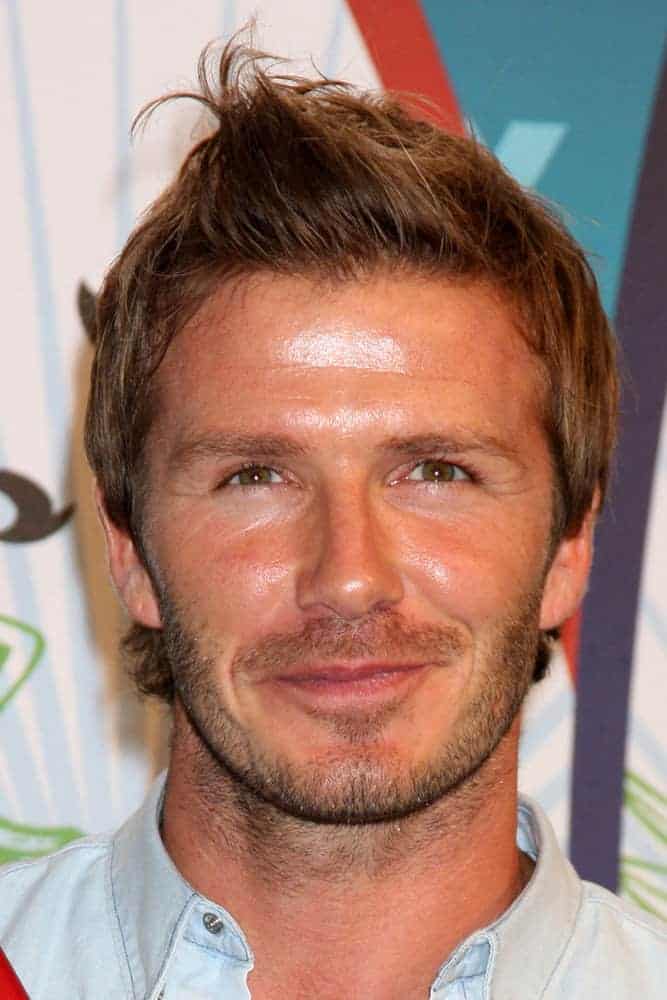 David Beckham styled his elongated hair with an outgrown temple and nape haircut as well as some quiff at the front during the 2010 Teen Choice Awards at Gibson Amphitheater at Universal on August 8, 2010, in Los Angeles, CA. 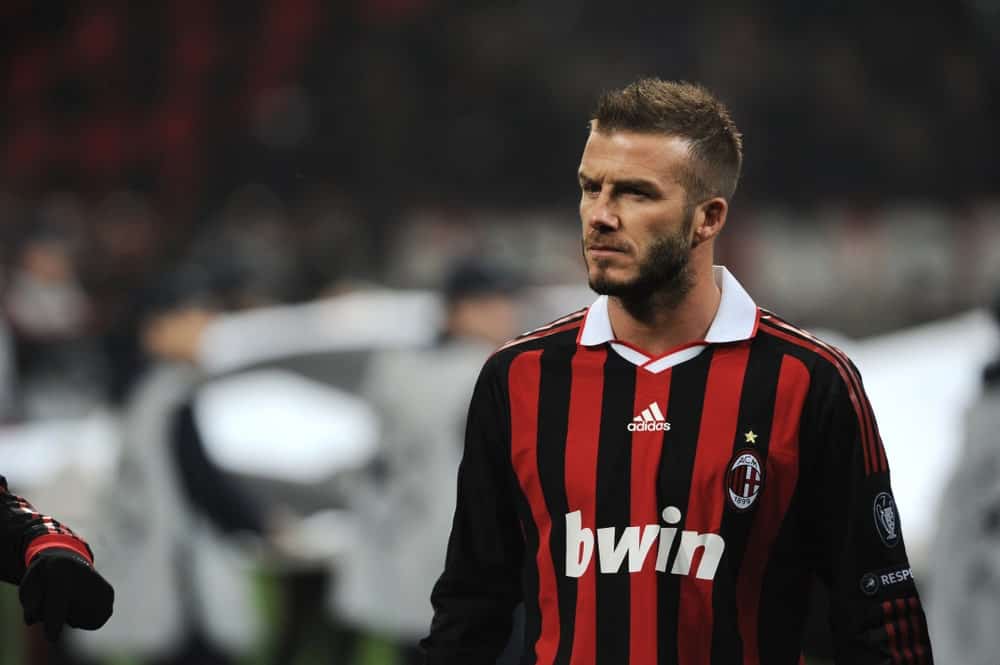 David Beckham had some spikes with his short brunette hair during the match at San Siro stadium at the UEFA Champions League 2009/2010 on February 16, 2010.

David Beckham had a darker short simple haircut during the Italian Serie A soccer match AC Milan vs Palermo, at San Siro stadium, in Milan on April 26, 2009.

On September 26, 2008, David Beckham exhibited his short hair with a buzz cut during the in-store appearance for Exclusive Launch of Beckham Signature Fragrance at Macy’s Herald Square, New York.

David Beckham pulled off a formal look wearing a suit and tie along with a buzz cut hairstyle when he attended the 2008 ESPY Awards at Nokia Theatre, Los Angeles on July 16, 2008.

The football star player during a training session at the Al Nasr soccer stadium in Dubai last January 03, 2008. He had a short hairstyle complementing his short beard.

On December 30, 2007, David Beckham sported a short crew cut and some beard while he was presented as the new AC Milan’s soccer player, in Milan. 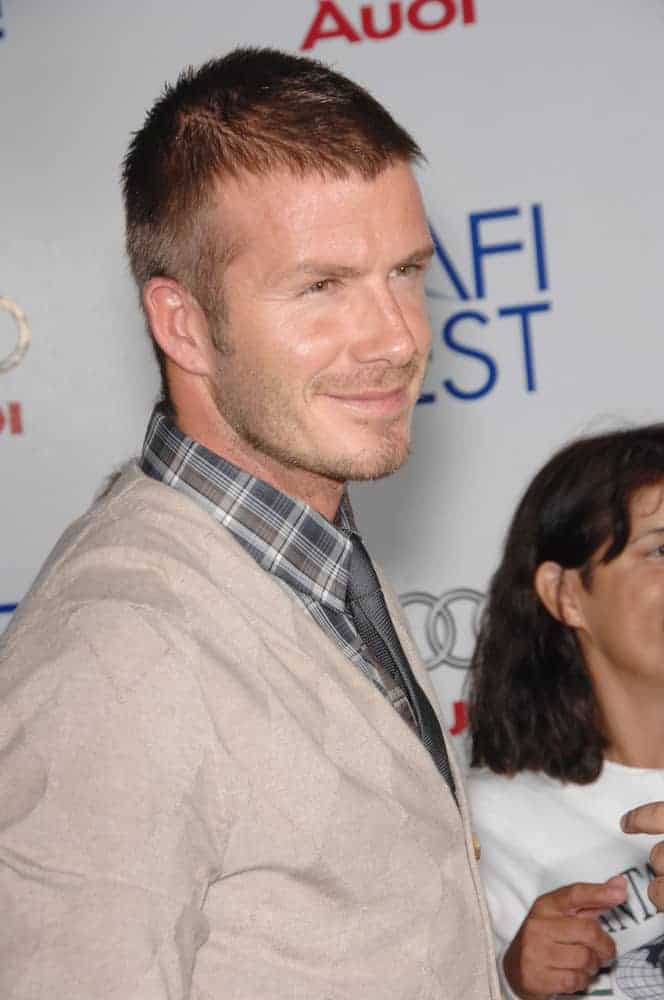 David Beckham rocked a blonde and buzz cut ‘do when he was introduced as the newest member of the Los Angeles Galaxy in 2007.

David Beckham sported a neat and short crew cut during the Spanish league football match between Real Madrid and Mallorca on January 23, 2005.

David Beckham looked fashionable with a top knot and white suit during the 2003 MTV Movie Awards on May 31st in Los Angeles. He finished the look with sparkling bling and earrings. 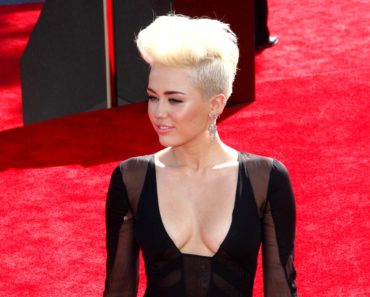 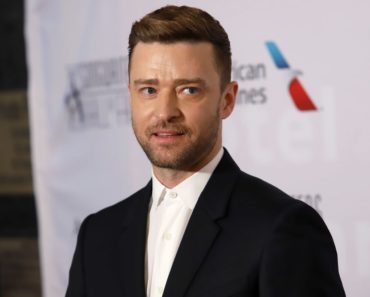