Have you seen the Twilight Saga? Then you will definitely remember this actress with beautiful and attractive eyes. This film gave her immense fame. She has a lot of fan followings who constantly keep track of her looks and hairstyles. Many young women try to follow her fashion trends. When it comes to hairstyles, she never denies experimenting.

Her acting career started only at the age of 11. At that time she had bob cut hair parted at the center. Slowly with her age, she started growing her hair long. She was seen in straight dark hair at the premiere of Cold Creek Manor in 2003. She tried loose curls with blonde hues at a film festival in 2005. She got bleach blonde waves for her role in the movie ‘In the Land of Women’.

Check out Kristen Stewart’s hairstyles over the years.

A fresh-faced Kristen Stewart attends the 'Equals' premiere during the 2015 Toronto International Film Festival with a slicked-back hairstyle which perfectly complements her black pleated bodice dress, providing a modern and neat glamour on her looks. 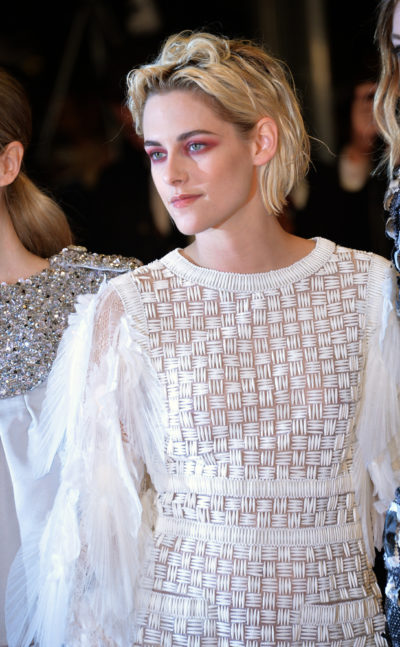 Darker shades seem to suit her more. She looks very elegant with up-dos. We have seen her with up-do hairstyle in a number of movie premieres and events. Waves with layers accentuate the best features of her face and she looks very stylish. She has tried bangs and side-swept styles as well. Many times we have noticed her in swept-back hairstyles.

It has become her signature hairstyle. We have seen her in swept-back ponytails and braids too. She changed her hair color quite a number of times from black to auburn or different shades of brown. Side swept curls give her a luxurious look.

Kristen Stewart’s parents were in the show business. So, her acting career started at a very early age. In 2002, she got a nomination for the Young Artist Award for the film Panic Room. Some of her films worth mentioning are Zahura, Catch That Kid, Into The Wild, Speak, Equals, Camp X-Ray, Snow White and the Huntsman, Adventureland, etc. She got nominated for the Screen Actors Guild Award for the film Into The Wild. Her career transformed completely with the release of The Twilight Saga film series which were released from between 2008 to 2012.

The movie was a great success and her character Bella Swan received a lot of recognition. In 2010, she won the BAFTA Rising Star Award. She also got the Best Actress Award at the Milan International Film Festival in 2011 for the movie ‘Welcome to the Rileys’. She was awarded the Best Supporting Actress at the Cesar Award.

In 2012, she was named the highest earning actresses in Hollywood. She has done a number of modeling works. She represents the high fashion brands Chanel and Balenciaga. This Twilight star surely knows how to act and has given her best performances in many of her films. The critics also appreciate her performances. Hollywood is lucky to have such a talented actress like her. We can expect more exciting films from her this year.