Search
Menu
Search
Take a glance at Natalie Dormer's sleek hairstyles over the years. See how the gorgoeus English actress experiments with various hairstyles that are incorporated with her bold character.

Natalie Dormer is a well-known personality because of her astonishing beauty and appeal. More than the looks, her talent is pretty undeniable. Her roles are so diverse, it’s evidence of how flexible she is with her work. Talking about flexibility, she also is willing to sacrifice something for her job, but still maintaining the appeal and beauty she already has. Here is how she managed to be still the beauty she despite a huge challenge.

Natalie Dormer‘s hair has gone through quite a journey in her colorful career. Her largely varying characters in movies have forced her to change hairstyles very dramatically. These changes are, to put it clearly, are not minor. That actually includes shaving!

Natalie Dormer is a one of a kind beauty. This diamond has starred in hit movies such as The Hunger Games Mockingjay and box office hit TV series Game of Thrones. Her very important roles required her to put in new styles and even unconventional ones.

Not a lot of women, especially stars, are able to step up to the plate-like Natalie. Natalie never hesitated when she was asked to shave off her whole head. Eventually, it was decided that only half needs shaving. Luckily for her, and surprisingly for the fans and co-celebrities, she actually looked amazing with the special cut. She in fact looked sexier and a bit on the strong woman side of it.

What women and even men can learn from this is that no matter how hard for Natalie to change her hairstyle, she still did not hesitate mainly because of the responsibility and commitment she has to her profession.

The question now is, can you do a Natalie for your work?

Natalie Dormer is an English actress born in 1982. She was raised in Berkshire, to where she was also born. Her first professional acting gig was in the famous Shakespeare flick “The Comedy of Errors”. Her first screen appearance was in Lasse Hallstrom’s heavy romantic film Casanova. It was followed by a minor role in the semi-comedy Distant Shores. She garnered prestigious commends for her role as Anne Boleyn in the hit TV series The Tudors. That role she had is arguably her most significant break in the movie industry. She then went on to get two Gemini Awards for the act.

Her movie launching was with Casanova, to which she was portraying Victoria. In this piece, fans saw another shining moment for the beautiful movie star.

In the year 2008, Dormer played the role of Moira Nicholson in “Why Didn’t They Ask Evans?”. She also was a part of the flick City of Life.

In September 2014, she was announced to be part of the cast for the action thriller “Patient Zero”.

Natalie Dormer is a real-life example of a product of beauty and hard work. More than that, her humility and the willingness to go the extra mile has earned her so much success in her career and personal life.

Here are Natalie Dormer’s hairstyles over the years.

Natalie Dormer looking fabulous in a blonde slicked hairstyle that she flaunted during the HBO Game of Thrones final season premiere at Radio City Music Hall on April 3, 2019.

Natalie Dormer with her voluminous blonde tresses styled in side-swept layers. This hairstyle along with a black leather dress was worn during the BRIT Awards 2019 at the O2 Arena, London on February 20th.

Natalie Dormer gathered her long blonde locks in a slicked high bun at the 2018 IWC Schaffhausen Gala Dinner in Honour of the BFI at the Electric Light Station, London last October 9, 2018.

Natalie Dormer pulled off a sharp look with her highlighted blonde waves styled in a sleek half updo during the “In Darkness” Premiere at ArcLight Hollywood on May 23, 2018.

Natalie Dormer rocked a messy slicked upstyle with loose tendrils at the ‘Picnic at Hanging Rock’ premiere during the 68th Berlinale International Film Festival Berlin at Zoo Palast on February 19, 2018.

Natalie Dormer was seen leaving the Theatre Royal Haymarket in London on November 29, 2017. She was wearing a brown coat and gray scarf along with a loose side-parted hairstyle.

Natalie Dormer wearing a black coat and a voluminous side-swept hairstyle as she leaves the Theatre Royal in London last October 27, 2017.

Natalie Dormer was spotted leaving the Theatre Royal in London on October 25, 2017, with her tousled side-swept waves complimented with a black jacket and a sheer skirt.

Natalie Dormer went for a high ponytail with a pouf that she paired with a matching red velvet suit and pants during the GQ Men of the Year Awards held at the Tate Modern in London on September 5, 2017.

Natalie Dormer in a panel at Comic-Con Experience last December 1, 2016. She was wearing a geometric dress that complements her simple loose hairstyle with subtle waves.

Natalie Dormer flaunted her beauty with her big volume side parting loose waves as she attends the Women in Film 2016 Crystal + Lucy Awards on June 15, 2016. 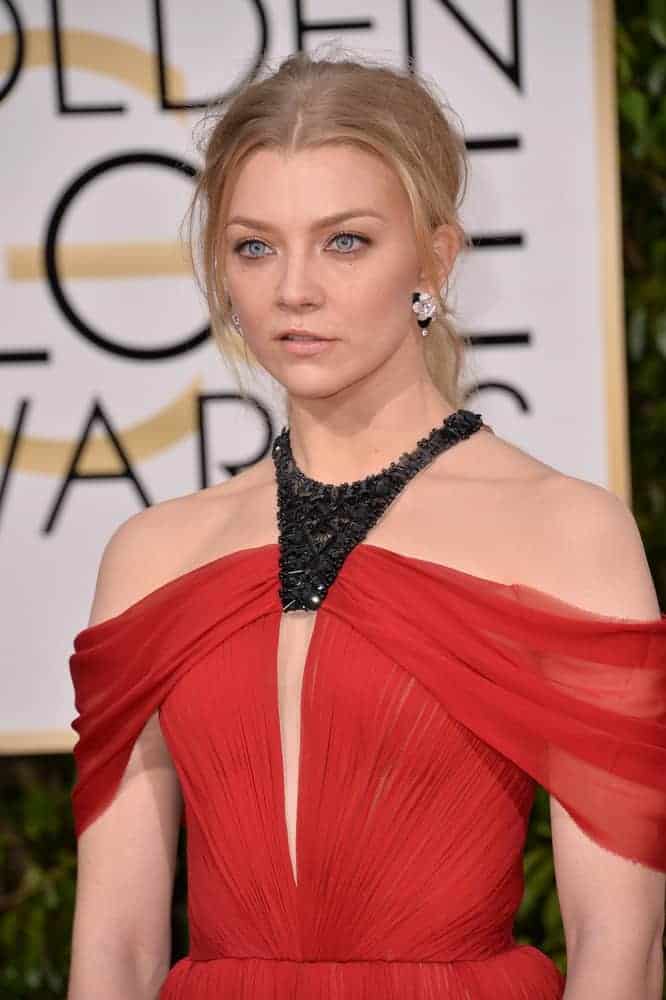 Natalie Dormer opted for a messy-hair-don’t-care vibe with this messy ponytail waves hairstyle with a few center-part pieces framing her face at the 73rd Annual Golden Globe Awards on January 10, 2016.

Natalie Dormer exhibited a smart look showcasing her red pants and suit that perfectly goes with her side-parted loose waves during the “Joy” premiere at the Ziegfeld Theatre on December 13, 2015. 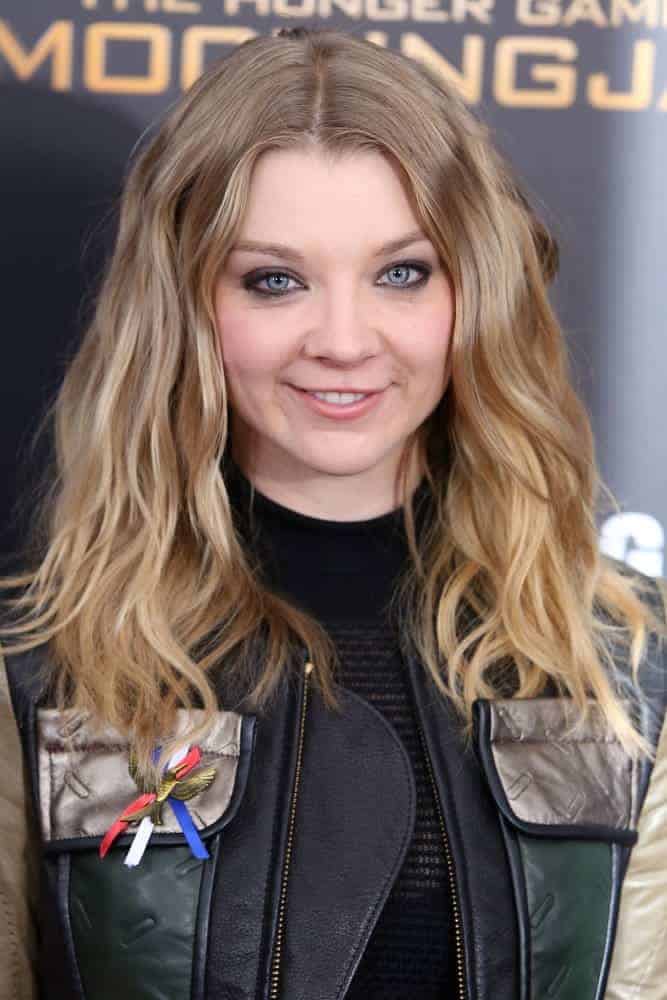 Natalie Dormer opted for a simple look by keeping her blonde tresses down into loose waves as she attends the premiere of “The Hunger Games: Mockingjay – Part 2” on November 18, 2015.

Natalie Dormer looked gorgeous in a silver printed dress along with a glam messy updo that she flaunted during the “The Hunger Games -Mockingjay Part 2” LA Premiere at the Microsoft Theater on November 16, 2015.

Natalie Dormer wore her blonde locks with deep side-parting and left it in loose shoulder-length with slight waves during the Hunger Games: Mockingjay – Part 2 – UK film premiere on November 5, 2015.

Natalie Dormer with her flowing blonde waves at the Los Angeles premiere of her movie “The Hunger Games: Mockingjay Part One” held on November 17, 2014.

On January 18, 2014, Natalie Dormer attended the 20th Annual Screen Actors Guild Awards at the Shrine Auditorium. She channeled her inner badass with an edgy side-swept hairstyle where the left side of her head is shaved.

Natalie Dormer with Joanna Coals at the White House Correspondents Dinner on April 27, 2013. Natalie sported a tousled slicked half updo paired with a black embellished dress.

Natalie Dormer pulled back her blonde hair in a neatly slicked upstyle during the Game Of Thrones Season 3 Los Angeles Premiere on March 18, 2013, in Los Angeles, CA.

Natalie Dormer wore a printed halter dress that perfectly goes with her bouncy waves at the Los Angeles Premiere Of “Captain America: The First Avenger,” held at El Capitan, Hollywood, CA on July 19, 2011.

Natalie Dormer with Henry Cavill arriving for the Showtime Hosts World Premiere Screening of THE TUDORS Season 2 held at Sheraton New York Hotel & Towers on March 19, 2008. The actress opted for a brunette wavy hairstyle that she paired with a lovely floral dress.

Natalie Dormer showcased a sultry look with a sexy beige dress and a loose wavy hairstyle at the Los Angeles premiere of her new movie Casanova held last November 13, 2005.