Some guys look terrific with a crew cut.  Other guys like the no-hassle cut but don’t want to shave it down to the skin.

What ever your reason for a crew, it can look great and an excellent lifestyle cut.  Below are dozens of crew cut examples.

The crew cut has been trending upward for years.  That’s interesting.  I guess it’s a viable option when hair is thinning instead of doing nothing.  Check out the trend chart:

Chris Hemsworth opted for a sophisticated and elegant look at the 20th Annual Critics’ Choice Movie Awards last January 15, 2015 at the Hollywood Palladium. He wore a classic black suit balanced with a spiky crew cut hairstyle.

Click here for Chris Hemsworth’s hairstyles over the years 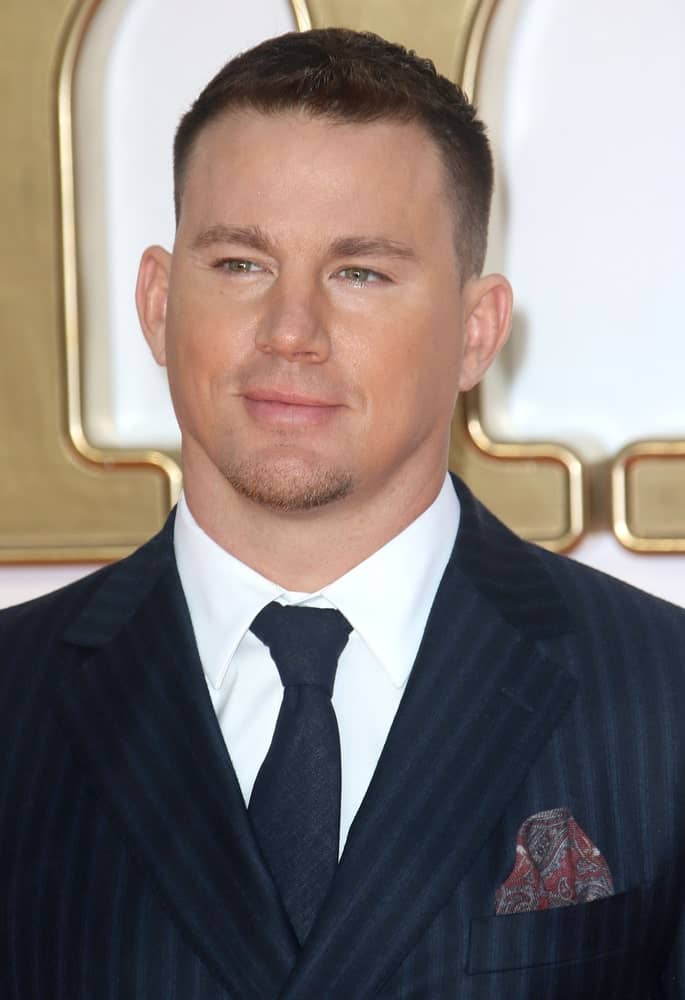 The actor pulled off a short crew cut with spikes in front during the Kingsman: The Golden Circle World Premiere at Odeon Leicester Square on September 18, 2017.

Click here for Channing Tatum’s Hairstyles over the years

Chris Pine’s brilliant blue eyes are at full display with his short salt and pepper crew cut and trimmed beard at the Los Angeles 2017 premiere of ‘Wonder Woman’ held at the Pantages Theatre in Hollywood.

Click here for Chris Pine’s hairstyles over the years

Tom Cruise was at the premiere of “Mission Impossible Ghost Protocol” at the IMAX cinema, South Bank, London last December 13, 2011. He was quite a stunner in his smart casual outfit and short crew cut hairstyle.

Click here for Tom Cruise’s hairstyles over the years

Orlando Bloom wore a smart-casual ensemble outfit and jeans with his short and curly crew cut fade hairstyle at The Tar Estate in Bel Air, CA on August 23, 2008.

On November 3, 2018, Benedict Cumberbatch made an appearance at the premiere of “The Grinch” at the Alice Tully Hall with a textured crew cut incorporated with a mustache.

Click here for Benedict Cumberbatch’s hairstyles over the years

Adam Levine of Maroon 5 attended the Global Green Pre-Oscar Celebration to Benefit Global Warming held at The Avalon in Hollywood, California on February 21, 2007. He wore a fashion-forward suit with his spiked crew cut hairstyle.

Click here for Adam Levine’s hairstyles over the years

A clean-shaven Chris Evans was at the 24th Annual GLAAD Media Awards at the JW Marriott Los Angeles at L.A. LIVE on April 20, 2013. He wore a smart casual outfit with his spiked crew cut hairstyle.

On February 24, 2007, Ryan Gosling had a short crew cut hairstyle that worked quite well with his dapper outfit at the 2007 Film Independent’s Spirit Awards in Santa Monica Pier, Santa Monica.

Click here for Ryan Gosling’s hairstyles over the years

The actor kept it simple but elegant with the classic hairstyle he wore during the 69th annual Cannes Film Festival last May 11, 2016.

With a shade lighter than his usual, Timberlake's hair is arranged in a brushed back style during the LA premiere of "Trolls" last October 23, 2016.

One of the actor's trademark is his wavy crew cut that is totally simple yet mesmerizing. This look was once again worn last April 14, 2016 at the premiere of "The Devil and the Deep Blue Sea".

Matthew McConaughey's wavy hair is fully-polished using a setting-spray that created a nice and slightly shiny finish. This look was worn last July 31, 2017 for the special screening of the "The Dark Tower".

The ever dapper McConaughey in a short crew cut during the Hollywood Film Awards Gala 2013.

Probably one of the actor's trademarks when it comes to style is his waves in a crew cut. This photo was taken last June 24, 2012 at the Magic Mike" LAFF Premiere.

With a fresh crew cut in not-so-short length, the actor attended the Film Independent Spirit Awards all prepped-up and confident.

The singer exhibited a fresh and youthful aura at the The Voice Red Carpet Event last April 21, 2016. His typical crew cut is styled with some hair wax to create a subtle texture and depth.

The difference between an Ivy League cut and a crew cut is just the length of the strands. The style is almost the same, except an Ivy League has somehow longer strands. Adam Levine was spotted with this kind of hairstyle during the "The Voice" Season 4 Top 12 Event last May 8, 2013.

The singer has an impression of being a prim and proper person on his early years in the industry. As matter of fact, this neat crew cut he wore for The Voice Season 5's photo call last November 2013, is somehow a trademark look of him.

Matthew McConaughey opted for a buzz cut during the world premiere of his movie "EDtv" in 1999.

Chris Hemsworth in a classic crew cut hairstyle at the Los Angeles Premiere of 'Star Trek.

This high and tight modern haircut blends well for any face shape plus a skin fade or a classic fade will complete the look.

This cut is different to your ordinary afro style. It is essentially a mini afro paired with a shadow face cut.

This cool faux hawk interpretation has all the sides including the back faded. Perfect for black men because this cut is the closest to the original Mohawk.

Short styles are not only great for balding hair, but they also make a good team-up with a lush beard.

Good balding hairstyles can accentuate your bone structure. Go clean with a high-and-tight and grow a beard with its lines running parallel to your cheek bones accentuating your strong jaw line.
0shares